The title speaks volumes so read on to hear what we think of the classic free to play RPG of Legenadry Games Studios !!! 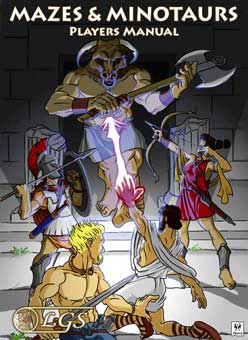 One of the new members of our guild brought forth the idea of us playing a different RPG at our next game session. At first when he mentioned it I had heard of it before but never played or read any of the materials. To my surprise I discovered it was a free to play game and he himself had had worked with Legendary Games Studios so expect an interview with him in the near future. With the summer season around and the Euro 2016 being the biggest topic it was high time I put something out for my nerds too.

The game is set in the mythic setting of ancient Greece and the theme is heavy in the game. The selection of classes are easy to understand as well as equipping  and filling out the character sheet is straightforward and streamlined for ease of play. It runs on a D20 system and has numerous modules free to download online. I had the pleasure of playing two sessions thus far of the game and am returning tonight to wrap up the adventure we are currently on.

What I really did like was how fast we rolled our character sheets and how combat is much easier than in Dungeons & Dragons 3.5. No attack opportunities and no feats, I found myself not having to as the Game Master too much as is that easy to play. The backdrop and setting also is fun because how many of us in high school would have to killed to play a game such as this when we were reading of Hercules and Hades. What is refreshing is the change of pace and amount of reading required to get into the meat of the game. To play your class you literally only need to read your page on your specific class and the rest pretty much plays out as any other RPG. The flavor does separate it and the price point is impossible to beat. We all truly recommend this game for anybody looking for something new and I would say is a must if you are trying to introduce new players to Role Playing Games as other RPGs tend to involve a lot more reading and newbs will walk away unimpressed, overwhelmed or bored in the first session. Mazes and Minotaurs does not share this problem and can go over well with an entire of party of newbs and as a result of a streamlined system you spend WAY less time flipping through pages and more time engaged in the game.