One of the most popular games out now makes the cut. Read more to see why we enjoyed this card drafter

I first saw this game being played at a convention and it seemed pretty interesting at a first glance. Building up wonders , I think five people were playing and the artwork really impressed me. It really looks like the developers and publishers had really put in some hard work. The different size cards and draw system intrigued me and the players seemed to really be having a blast. I was still kinda new to the drafting card game as a system but I liked how the game seemed to flow pretty fast despite all the players. I watched a few turns play out before grabbing a smoke break and talking to someone who had played it before where they broke down some of the core mechanics. At the time he mentioned how the expansions added more to the game and how he was surprised I had not come across it before. It seemed like something I would like to play, it had enough moving parts and flavor I thought to be something worth buying especially when you can play up to seven out the box. It is hard to find a board game that can scale well and I am always looking for games that can include more players as I rarely have the perfect numbers to run some of my other board games which often cap at 4 to 5. 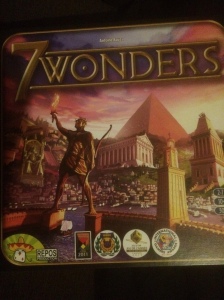 Only a few months later I find myself playing the game with some friends after a dinner party and I was instantly sold on it. It did not take long to explain the rules and the beautiful artwork and colors added to theme. The owner of the game we played had it very well organized so the set up was pretty smooth and it just looked fun and the dinner table sat 6 comfortably so there was ample room for the guests. The system of play was new to me and the way you drew cards and point system made sure you had several ways of winning the game which several of the players found interesting along with the diplomacy and deal brokering that could occur between turns. The energy at the table felt like everyone was eager for the next turn and after a few turns the players stopped asking questions and kept things moving. Despite the game not being cooperative it did not really have us at each others throat and was not too rule heavy. This all added to the excitement and I decided that it would be something I purchase for my new group when I move to Sweden.  The game has been critically acclaimed since its original print in 2010 for Repos Production from Belgium. Designed by Antoine Bauza, a designer I was not to familiar with but he won the Game of the Year Award (Spel Des Jahres 2011) and apart from that I could not find much on him online.

When I walked into Dragons Lair and saw they had all the expansions I figured this was a game that has staying power and obviously is well supported by its publisher. Another thing that was an unofficial cosign was that several of the store’s customers I asked for opinions said the game was easy to learn and fun to play. In fact out of the four people I asked all four had played and had something nice to say about it. After reading more about what the expansions offered I immediately bought Leaders and the stand alone Duels so that I could play with my Girlfriend who was keen on the idea after already playing the basic Settlers of Catan game for boardgaming.

The first time we played we had 5 players and it took us in total two hours to run the first game but it was thoroughly enjoyable for everybody involved. The rules were pretty straight forward, the color coding of the cards you drew and their abilities made for some interesting back and forth across the table as players new to board games quickly got a hang for the mechanics. The time system makes sure the game does not last too long so the next few games were around an hour and some change. I do not see how someone could play it in under an hour with 5-7 players unless they all shared the same degree of experience in playing it.

7 Wonders plays like no other game I have played before, the artwork is brilliant and the the mechanics are really quick to learn even for the most novice of players. The game has replay value and just looks inviting once set up. If you are thinking of the next board game you want to buy for your group to play every once in a while that is not too intense 7 Wonders is what you should be looking for. What I really enjoyed was how the game forces you to consider and pay attention to what is happening around the table, meaning more interaction between players and a interest in what they did in their turn. It has enough strategy that my brother who is a stern strategy game player had a blast setting up resource cards and building up his forces.  There is something to building up an ancient civilization and constructing a wonder that is just awesome for the average history buff like Apollo.

The downside is that is that it is not a cheap game and the cards should be sleeved for repeat play. The thing about card heavy games is the constant shuffling and use results in wear and tear and 7 Wonders really looks too good that the aesthetics are a huge part of why you like the game. The sleeves just keep the game looking good for longer and saves your nerves when sticky fingers threaten smudge a card. That is where it gets a little tricky because the game is so popular and demand for those specific sleeves so high it is hard to find them in-stock at most online board game retailers. I have spoken to several clerks who have confirmed that the suppliers cannot ship enough and there are shortages in several countries. The sleeve size is not as common as the american board game or trading card game which does add to the problem. Apart from the money you have to invest the game does require a bigger playing surface to fully enjoy everything, much like Mare Nostrum, Twilight Imperium and any of the newer Dungeons and Dragons board games from Wizards of the Coast.

After discussing with my fellow Guild Members and Nerd Dimension crew we came to the decision conerning the score.

Out the box the game is impressive, easy to learn and will have you coming back for more. Due to its simple and fun play mechanics even players new to the genre will easily master it. We took points off for the price point, space requirements and do feel that the expansions did fix some things to make the game more interesting through new options and the introduction of new mechanics. This game is worth the money and we suggest reading up on the expansions if you are a seasoned player looking to have more depth and flavor out the gate. 7 Wonders has done great and stood the test of time, we predict that the game will continue to dominate and is firmly in the position that few title can claim.

please be sure to leave your feedback in the comments bellow and subscribe so you can see our reviews of the expansions for 7 Wonders.

I love reading and writing, enjoy RPGs of all forms and am a huge sci fi and fantasy fiction fan. Working on A Nerd Dimension & the podcast hoping to be able to get more people interested in my hobbies and passions and bridge the gap for those seeking to enter the culture. View all posts by Mykal K Grymm